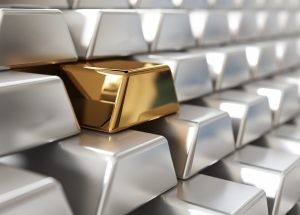 Italy staged a vote similar to Brexit on Sunday, in which Italian voters rejected a call to make the Prime Minister more powerful. This is one of a series of important votes in Europe pointing toward the eventual weakening or dissolution of the European Union (EU). In time this will hurt the euro. As a result, some major European banks have upped their price projections of silver for 2017.

In past years, silver has tended to rise or fall in tandem with gold, but silver will usually rise or fall much faster than gold – like “gold on steroids.” That is true again this year. Silver has outperformed gold and platinum so far in 2016, up over 21% vs. about 11% for gold and 4% for platinum. During July, after the June 23 Brexit vote, silver traded over $20 per ounce.

The reason silver tends to rise or fall faster than gold is due to its narrower market (vs. gold), so a small increase in silver demand can generate large percentage price gains. Specifically, the total world investment holdings in silver are just $51 billion vs. $3 trillion in investment gold. That’s a 60-to-1 ratio, so if only a small portion of the money from stocks, bonds and currencies turns to silver for greater profit potential, that could push silver prices up sharply.

There are various wise ways to purchase silver bullion. You can buy bars of one ounce and up. The bigger the bar, the less the premium you’ll pay over the spot silver price, but some dealers insist on having bigger bars assayed for purity and authenticity when you sell them. This often incurs time and added costs.

A preferable means of silver accumulation is to buy legal tender bullion coins that come in 1-ounce and 5-ounce sizes that trade at $2 or higher over spot value. These do not typically require assaying, but there are some counterfeits out there, so you must buy or sell with true experts. There are also one-ounce coin-sized silver bullion rounds that are typically .999 pure that trade closer to spot value than coins.

The buy-sell spread on rounds is typically minimal, so they are a convenient way to buy and sell. However, there are counterfeits. The most important caution is to “know your dealer” when you buy and sell all of your precious metals products. Our sales of silver one-ounce rounds have been increasing by the day. These are very popular for investment and, at this time of the year, gift giving.

Gold Coin Sales are Up

Gold declined $14 last week while silver lost just 10 cents. As we move into the final weeks of the year, gold is performing better than stocks and silver is performing more than twice as well as stocks. Gold is down this week and over the last few months due to a stronger dollar, mostly based on the assumption that the Federal Reserve will raise interest rates 0.25% next week (December 14), just like they did last December. The Fed’s rate increase last December sent gold down to its lowest level of the year, but gold recovered strongly in the first half of 2016 after the Fed kept delaying further rate increases. This may happen again in 2017, with the Fed raising rates in December but delaying further rate increases in 2017.

Counterfeiting Battles Continued in May